Cat!!! That's right folks, the Bowsmans have a new pet! 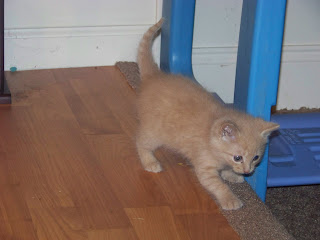 Last Thursday, our neighbors brought a baby kitten over that they had rescued. They were unable to keep her because they have dogs, so they were looking for her a good home. Having always been a cat lover, I said that we would keep her until we found her another home. However...
Madigan and I got really attached in a very short time and didn't want to let her go to a new home. And Ted - well, Ted can't say no to Madigan! (especially when she listed our family before bed one night and it went something like this "Daddy, Mommy, Ma-igan, and Baby Ki-ee!!") These pictures speak for themselves: 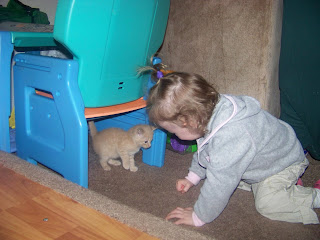 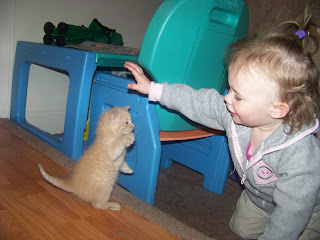 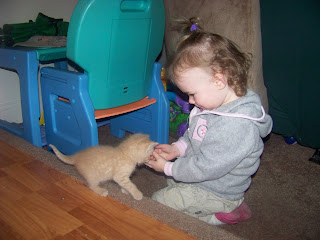 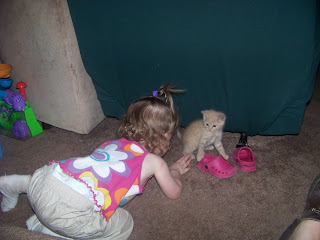 They've had quite a bit of fun together the past few days, but their favorite activity is "strolling". The cat (willingly) gets in the baby stroller and Madigan pushes her around. It's hilarious!

Now our only problem is coming up with a name. Whenever we ask Madigan what she wants to name the cat, she responds "Baby Ki-ee" or "Daddy". Since both of those could get a little confusing, we're still searching. Any suggestions are welcome!!
Posted by Bowsman Family at 11:54 AM 5 comments:

The Future Is So Bright... 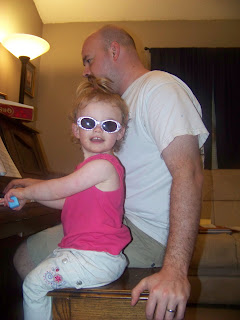 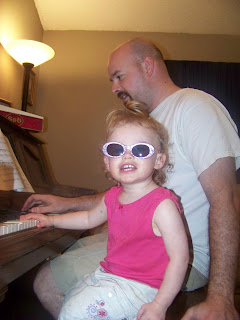 This is Madigan's latest favorite accessory. She wears them outside, inside, during the day, at night... you get the picture. 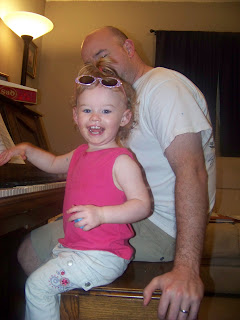 Here's a video of Madigan and Ted playing their duet...

Not much to blog about today, but I wanted to post a couple of pictures that I took of Madigan this past weekend. A friend of mine got married on Saturday, so Madigan got all fancied up. Unfortunately, we were running late, so these are the only pictures I snapped. They would have turned out better if I'd had time to clean up the clothes and toys we had just discarded in the floor behind her :). Oh well! 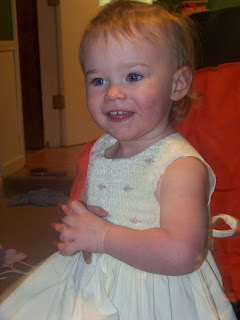 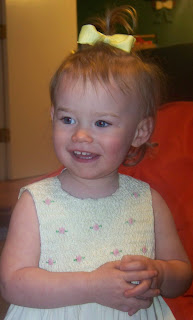 I'm not sure what she was doing in this picture, but it makes me laugh! 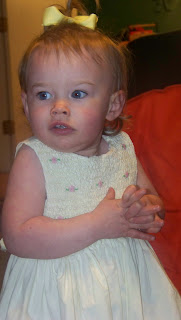 Hope your day is going good!
Posted by Bowsman Family at 8:34 AM 1 comment:

My Papa turned 75 last Tuesday. When asked how his birthday was, he responded "I guess being three quarters of a century makes you feel a LITTLE bit older.":) 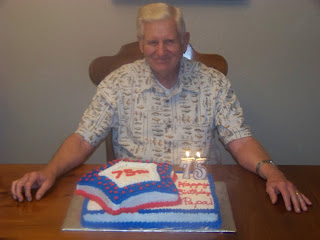 We were fortunate enough to get to travel to my parent's last weekend to celebrate the big occasion. So, as soon as we could cut out from work on Friday, we started the trip to the big town of Rusk, Texas. Madigan was SO excited to get to go to GeeGee and Pa's house - she just couldn't understand why it was taking so long! But, she was a trooper and remained in good spirits for the whole trip. Here's a video of her "hamming it up" in the car:

Before everyone arrived on Saturday, Pa took her on the much anticipated (red) tractor ride. But this time, Madigan made a deal. Sure, I'll ride with you... IF you take Lil' Baby and Big Baby with us! And, of course, Madigan got her way! 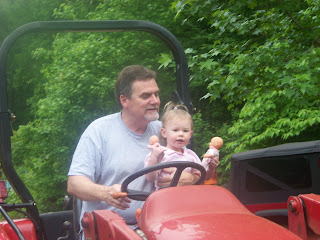 After the tractor ride (and a ride on the yard bug AND feeding the horse), we started to decorate for the PARTY!! 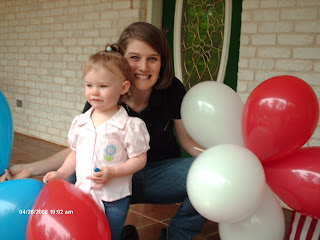 It wasn't long before everyone started to arrive and the fun began! This was an extra special weekend for us. Not only were Papa and Mema (who will also be 75 in November) there, 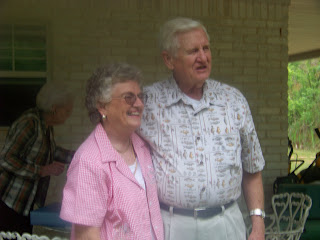 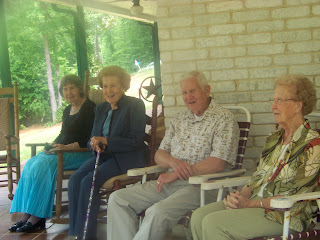 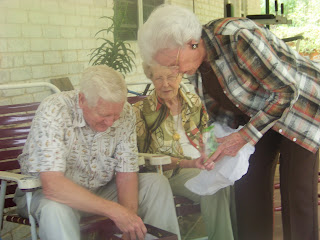 And let me tell you, there was no shortage of energy among these "elderly". At one point, Auntie was speed walking laps around the porch to work off her lunch, Mema was bustling around the kitchen doing dishes and Aunt Carmeen was... well, you'll just have to watch the video...

You can see why this was a special weekend for us. Here's a picture of the 4 generations of the girls. 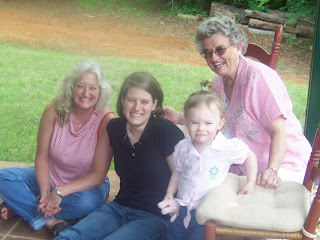 We were also so glad to see my Uncle Greg, Aunt D'Anne and cousin Taylor who we haven't seen since last Thanksgiving. Needless to say, Madigan got LOTS of attention being the only person who was under the age of 20 there! A few of the pictures:
Stuffing her face with peanuts 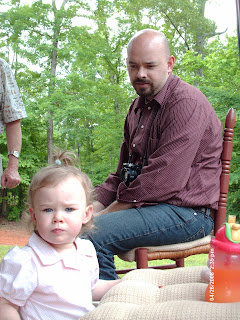 Taking a hayride (minus the hay) in GeeGee's yard bug 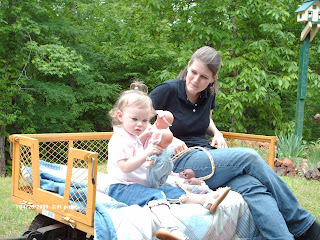 Picking and delivering beautiful "flowers" to everyone 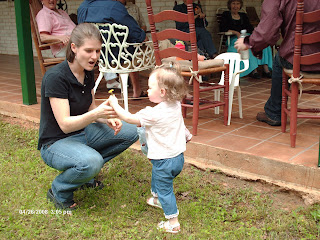 And wishing Papa a Happy Birthday! 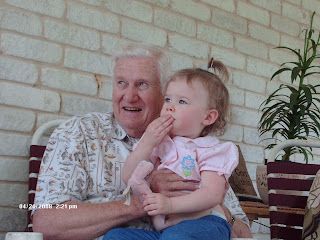 We had to head home on Saturday (see story below) and instead of sleeping on the trip, Madigan decided to stay up and party with her parents. Since we didn't get home until almost 10, she was a bit delirious when we reached Little Rock (this is a picture of her singing "If you're happy and you know it, then your face will surely show it...") 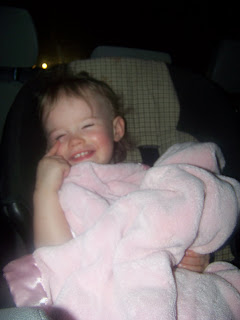 It was a WONDERFUL trip and we're so thankful to God for blessing us with such a great family. Happy Birthday Papa! We're looking forward to celebrating #80 with you soon!
A Few Other Things...

A Funny Story
We actually came home on Saturday night because Ted was being "installed" as a deacon at our church on Sunday morning. Obviously, we were VERY proud of him for being selected for this honor, but I'll be honest and say I was also a little uneasy about the actual "installation". You see, while we are making serious progress, Sunday morning church services aren't alway Madigan's finest moments. The whole "whisper" concept tends to be lost on her, especially during prayers. So, I was a little concerned that when Ted got called to stand before the congregation, Madigan might not be showing her angelic side (especially after staying awake until 10 the night before!) Anyway, the moment came and Ted's name was announced. Madigan and I stood until he got up front and then we sat down. Whew... she had behaved herself! A few other names were called and then Madigan looked at me and said "Diader" (translation - diaper). I whispered, "Do we need to change your diaper?" and she replied "Poopy!!" No problem - I picked up the diaper bag, scooped her up and out we headed. Madigan, however, wanted to make sure that no one thought she was getting hauled out because she was in trouble, so she took it upon herself to look at specific people as we walked down the aisle and (loudly) announce "Poopy, Poopy, Poopy!" I even covered her mouth with my hand, but she would not be silenced. I'll just say, it was a LONG trip to the back doors!!

Grandi sent Madigan a special present a few weeks ago - DORA stickers!!! Madigan thought they were fantastic! Ted opened the envelope for her and handed her the sticker page. This is what happened...

After she was done putting them all on her shirt, she moved to the kitchen cabinet. 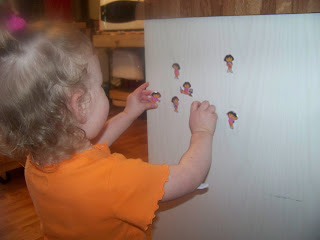 Thanks for the stickers, Grandi!!

I know I post a lot of pictures of Madigan and Jenna, but they spend 4 days a week together (not even counting Sunday morning and evening and other days we all get together!) This is one I captured of them being sweet. 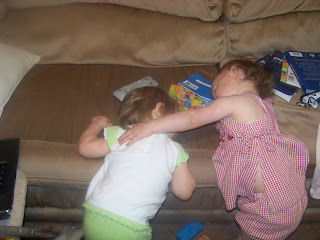 Laura took these next two pictures of our "smart" girls. Just look at the concentration to these books! 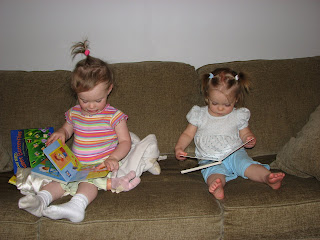 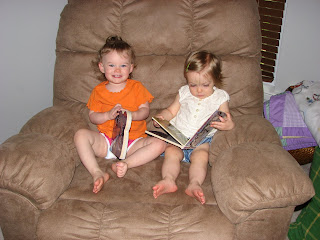 Last but not least, I wanted to share Madigan's newest "trick" with you. For her bedtime routine, I usually change her into her pajamas, brush her teeth, sing "Jesus Loves Me" and say a prayer. Then, I put her in bed. Lately, however, she's decided to put herself in bed... from the changing table.


I think we've got a daredevil on our hands! Oh well - I'm just hoping she doesn't learn how to crawl OUT of the crib anytime soon :)

I'll leave you with a fun picture. Hope you all have a great weekend! 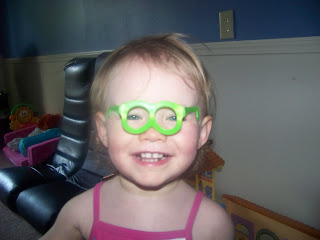 Posted by Bowsman Family at 7:32 PM No comments: